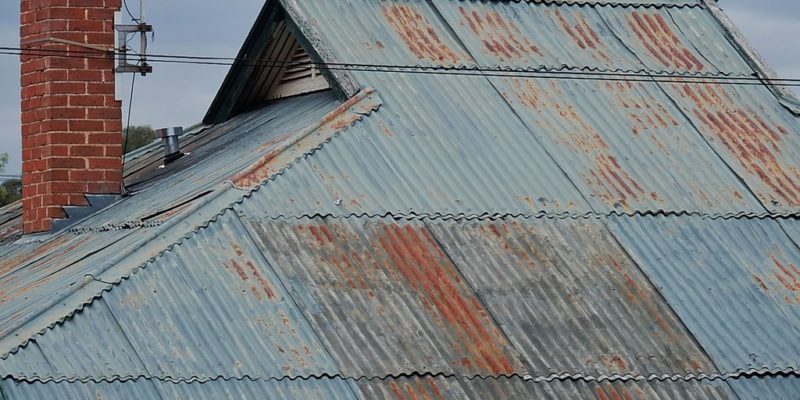 Although rust on roofs is more common on metal, it can also affect some shingle roofs. Rust stains on shingle roofs aren’t from your roofing material though – not unless you have shingles that contain metal at least. Most often, rust stain on shingle roofs are from a nearby metal object, such as your chimney flashing or metal drainage pipes. When these structures start to rust, the brownish red color can bleed onto the surrounding areas of your shingle roof.

Regardless of whether you have a metal or shingle roof, rust stains are unsightly and will take away from your home’s curb appeal. Rust is a more common problem on metal roofs, as the roofing itself can develop rusty spots over time. Especially in Florida, where humid weather conditions worsen the rust on your roof. The fact that the ocean releases salt water particles into the air, means that metal objects are even more prone to rust near the coastline.

The scientific term for rust is iron oxide (III). The term “oxide” is commonly used in chemistry to refer to a compound consisting of oxygen and another chemical element. Thus, iron oxide is formed when iron atoms bond with oxygen atoms, but what causes this to happen?

The Science Behind Rust

Before looking at how iron bonds with oxygen, consider carbon and oxygen.

However, carbon atoms can combine with oxygen atoms to form other compounds as well. Carbon monoxide is an example of this, as it consists of one carbon atom and one oxygen atom.

But on an atomic level, even small differences in composition have a large impact on the compound that’s formed. Carbon monoxide is also a compound consisting of carbon and oxygen. But unlike carbon monoxide, only one atom of oxygen is present in each molecule rather than two. As a result, carbon monoxide is hazardous to breathe in and can even lead to death if too much is inhaled.

Similarly, rust is a chemical compound consisting of two iron atoms bonded with three oxygen atoms. Just like with carbon, iron can bond with oxygen in different ways. For example, iron oxide can consist of a single atom of iron and oxygen each, but this isn’t rust. When this happens, the resulting compound is referred to as iron oxide (II), but this isn’t rust. The only ratio of iron to oxygen atoms that will produce rust is two iron atoms to three oxygen atoms, forming iron oxide (III).

The reason why rust naturally is because iron and oxygen have opposite charges. This causes oxygen and iron atoms to form bonds to neutralize their respective charges.

Why Does Your Roof Rust?

As you might’ve guessed, your metal roof or chimney flashing contains iron. When the iron atoms in your roof bond with oxygen atoms, it causes a process called oxidation. As the iron oxidizes, the metal in the roof converts to iron oxide (III), or rust.

The process of rust formation happens specifically when water is present. Water helps iron to react with oxygen, which is why it’s necessary. Salt water further accelerates rust formation. But metal objects don’t have to be submerged in water for rust to form. Water vapor present in the air can be enough to facilitate rusting.

Seeing as Florida is by the ocean, a lot of water particles are present in the air. Salt water vapor is also common in areas right next to the shore, meaning rust is a persisting problem in the sunshine state.

How to Clean Rust on Your Roof

When dealing with rust stains on your roof, professional help is a must. The chemicals and equipment used to remove rust stains from your roof can be dangerous if you don’t know how to work with them.

Some organic rust converters are available on the market. These products are safer to use than acid, as they simply convert the rust into other harmful chemicals by means of chemical reaction. However, rust converters won’t necessarily be effective at removing all the staining on your roof, as it’s most effective on areas that are highly rusted. If certain areas on your roof are very rusted, a rust converter might be a good choice to reduce the problem though.

Repaint Your Rusty Roof after Cleaning It

While cleaning rust stains from your roof will already improve its appearance, it won’t prevent your roof from rusting again. Once your roof is clean, you’ll need to investigate it to find the areas where the rust is forming. These areas will need to be treated to prevent rust from forming again.

To get rid of the rust once and for all, you’ll need to use a wire brush or sanding tool to remove the rust. After thoroughly cleaning your roof and all the rusted spot, it must be repainted as soon as possible to minimize exposure to air and moisture.

If you don’t repaint a metal roof after cleaning it, your roof will look better for a while. But once rust starts to form again, it will likely be at a more rapid pace. By cleaning the roof, you’ll remove some paint and exposing the rusted areas more. Because of this, repainting with a water resistant, weather proof coating is essential.

Before applying the paint you chose for your metal roof, you must treat it with a steel primer. Applying a primer will is one of the best ways to prevent rust from forming again.

How Rust on Roofs Can Be Prevented

It’s better to prevent rust from forming on your roof than to treat it once it forms. New metal roofs and chimney flashings are often covered in a rust resistant coating. Even slate and asphalt shingles are coated for protection. Over time, this rust resistant coating will wear off, however.

For metal roofs, the best way to prevent rust is to ensure the roof is always coated in water resistant coating. Be sure the repaint your roof every few years. If the paint starts to look old and faded, your roof could benefit from repainting.

When you do maintenance on your roof, don’t forget to check every component f your roof. It can be easy to forget to check nails or rivets and focus only on the roofing panels, but rusty nails can cause rust stains to bleed from the affected area. Any roofing components that are rusted must either be replaced or cleaned and treated for rust.

If you a chimney flashing or similar metal fixture on your roof, you can also have it cleaned so that you can treat it for rust. When applying primer and paint to a chimney, opt for high heat paints. The chimney area is often exposed to high temperatures which normal finishes can’t withstand. For the best results, your paint and primer should be rated to withstand approximately 250 degrees Fahrenheit. A paint that’s rated for 250 degrees might not require a primer if you’re using it on your chimney, so you can ask your local hardware store assistance for help in choosing the right product.

Maintaining your metal roof is the best way of preventing rust. Even with the best maintenance, the coastal weather can still take its toll on your roof. Working with expert roof cleaners and maintenance contractors can help you restore your roof to its former beauty!